Annigoni, Pietro
1910-1988
Pietro Annigoni was born on the 7th of June 1910 in Milan, where he was a student at the College of the Piarist Fathers. Annigoni enrolled for the nude class run by the Circolo Degli Artisti, while attending the open class in the same subject at the Academy. After finishing senior school he was admitted in 1927 to the Academy of Fine Arts, where he attended the courses given by Felice Carena in painting. He had his first individual exhibition two years later at the Bellini Gallery in the Palazzo Ferroni, Florence.

March 1949 saw Annigoni’s first experience of England, when the Committee of the Royal Academy accepted the works he offered for its annual exhibition. This lead to success to world wide success.

Annigoni had many exhibitions in London – at Wildenstein’s Galley in 1950 and 1954, at Agnew’s in 1952 and 1956, at the Federation of British Artists in 1961, at the Upper Grosvenor Galleries in 1966, plus the inclusion of his work in many Royal Academy exhibitions.

Annigoni’s portraits are famous the world over. Some of the most eminent people have sat for him. Time magazine has used him on its cover on no less than seven occasions. The portraits of the British Royal Family are among the best known. 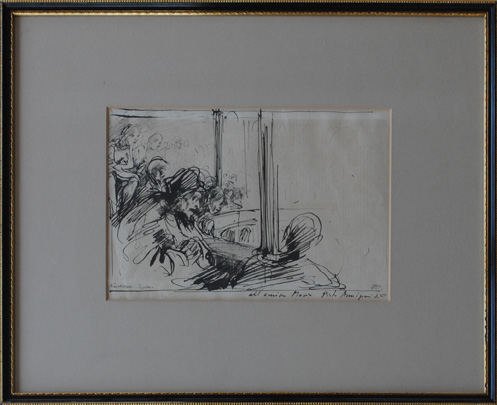