Derek Boshier, born in Portsmouth, England in 1937 attended the Royal college of art in London, alongside David Hockney, Allen Jones and Peter Phillips, graduating in 1962. During his college years his work was didactic, commenting on the space race, the all-powerful multinationals and the increasing Americanisation of English culture.

He appeared with Peter Blake, Pauline Boty and Peter Phillips in Pop Goes the Easel (1962), a film by Ken Russell for the BBC’s Monitor series. Boshier later played the role of John Everett Millais in Russell’s television film Dante’s Inferno.

Never one to allow his message to be governed by any particular medium, at the 1964 The New Generation show at the Whitechapel Gallery he exhibited large shaped canvases with vibrant areas of evenly applied colour.

After 1966 he has used metal, coloured plastics, even neon light, the materials of the commercial sign maker, to create three-dimensional objects. Also he has experimented both with books and film.

During the early 1970s Boshier taught at Central School of Art and Design where one of his pupils was Joe Strummer of The Clash. This led to Boshier designing The Clash’s second song book. He also worked on designs for David Bowie most notably the ‘falling figure’ the album cover for ‘The lodger’.

Social commentary has once more become a major element of his work tackling head on subjects that have strong political overtones such as gun control, police brutality and once again, the multinationals. 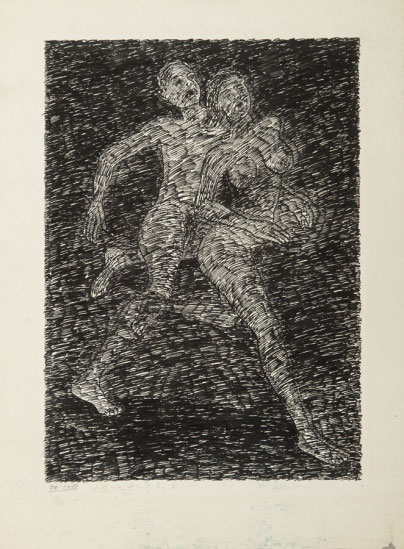 directly from the artist
Collection of Anda Rottenberg