Arman (née Armand Pierre Fernandez) was born in 1928 in Nice, France. Arman’s foundation as an artist began in 1949, where he spent time painting in the Surrealist style at the École du Louvre. By 1958, Armand was making his mark on the art world as a painter and sculptor, who retained a printer’s misspelling of his name and referred to himself as Arman.

In 1960, Arman, along with his influential circle of friends, founded the Nouveau Realist movement unified in their notion of “new perspective approaches of reality.” The group set out to reassess the role of art in a consumerist 20th Century society and reinsert humanism in the face of industrial expansion. In 1961, Arman made his debut in the United States with his first major group exhibition The Art of Assemblage, at the Museum of Modern Art in New York.

From 1961 onwards, he explored creation via destruction. Namely, the “Coupes” and the “Colères” which included sliced, burned, or smashed objects arranged on canvas, often using objects with a strong “identity” such as musical instruments, bicycles, even automobiles. Arman has created monumental public installations worldwide, notably, Long Term Parking, a 50-foot-high column of concrete that encases dozens of cars created in 1982 in the Parisian suburb of Jouy-en-Josas.

Arman’s work is included in numerous public and private collections and has been exhibited internationally at museums and institutions including the Museum of Modern Art, New York; the Stedelijk Museum, Amsterdam; Lo Jolla Museum of Contemporary Art, California; and the Musee d’Art Moderne de la Ville de Paris, France.  In the fall of 2010, the Centres Pompidou, Paris held a massive Arman retrospective. 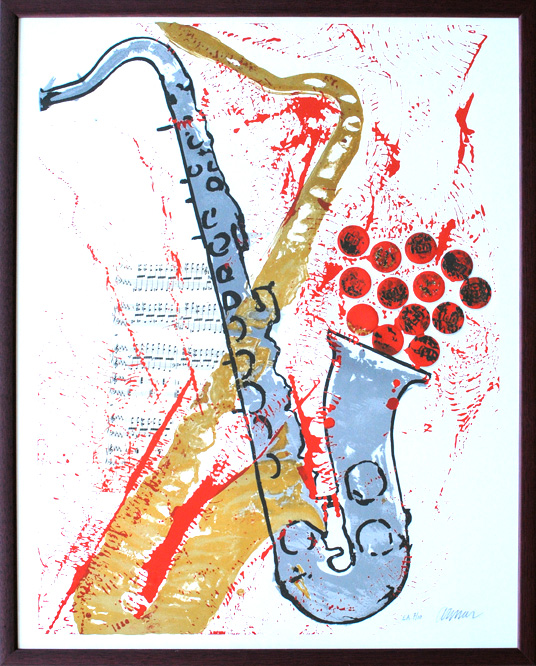